Closures to Some Are Cuts to All! An educational and organizing event on the fight for our public schools 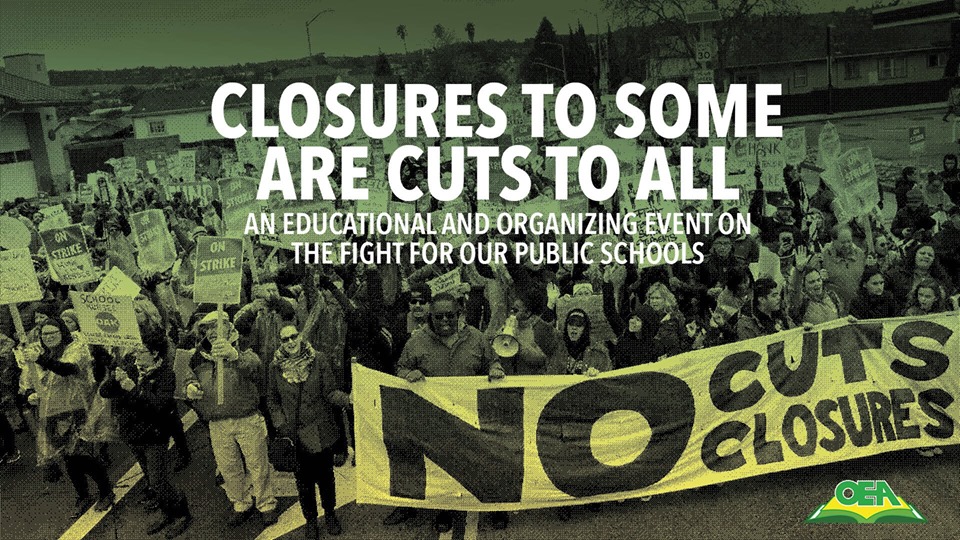 Oakland families and teachers: come learn about the devastating effects of school closures, co-locations and privatization on Oakland communities and discuss how to organize and ﬁght back!

Since 2004, the Oakland Unified School District has closed 16 neighborhood public schools. 14 of them have been reopened as privately managed (but publicly funded) charter schools.

Now the district is intent on closing up to 24 of our 87 remaining schools, in what they are calling their “Citywide Plan”. Meanwhile, California State’s Prop 39 is allowing charter schools to occupy classrooms within public schools, even when they are being used for high-needs students and critical programs. This abusive practice called “co-location” is imposed without any input from teachers and families.

OUSD is saying that these closures are about “right-sizing” the district. Their record, however, makes their intention very clear: they are enabling the privatization of our education system. This attack has a few fronts: gradual takeover by co-locations, closing entire schools and replacing them with charters, and handing over education services, like cafeteria and library management, to private companies.

If you follow the money behind the charter industry, you find the Koch Brothers, the Walton Family, Eli Broad, and other billionaires. They pour millions of dollars into promoting these privately-run schools as a solution to our “failing” public school system. But studies show that their “solution” is only making things worse! Schools that perform well are those that are funded, period. Instead of forcing education into the private sector, where the community has even less of a say on how our schools are run, we should have properly-funded public schools. Unchecked charter expansion is furthering segregation in our school system, it is funneling money out of classrooms and into Wall Street, and it is weakening organized labor, as most charter schools workers are not in unions.

In Oakland, the expansion of charter schools is causing a waste of $57 million every year – money that could have been spent on our students. The Citywide Plan is supposedly engineered to ensure that OUSD can be financially sustainable. But even the district was forced to admit that closing schools doesn’t save money. If OUSD wants to save money, they should stop the notorious mismanagement of their finances!

Our strike forced the district to put a temporary pause on school closures. But we are still under constant attack by the co-locations, and we know they will resume their school closures as soon as they can. We must continue to #Unite4OaklandKids by fighting back against these attacks, and demand fully-funded public schools!

Video on the occupation of Howard Elementary by Francophone charter school: